October is Breast Cancer Awareness Month in many countries throughout the world. Here in San Miguel de Allende, Mexico it´s no different. The slogan is “Early Detection is The Solution”. Wait a minute! Shouldn´t the slogan be “Prevention is The Solution?” Detection means that you already got it…and chances are you´ve had it for many years…even decades…but didn´t know it, until now, when the cancer has already reached a size that is detectable, either by self-examination or a machine.

Dr. Michael Greger, author of the New York Times Best Seller, “How Not to Die”, states:

“The breast cancer you may feel one day as a lump in the shower may have started 20 years before. We now suspect that all the epithelial cancers—breast, colon, lung, pancreas, prostate, ovarian—the ones that cause the vast majority of cancer deaths—may have been growing for up to 20 years or more. By the time it’s picked up, it may have already been growing, maturing, scheming, for years— acquiring hundreds of new survival-of-the-fittest mutations to grow even quicker and to better undermine our immune system. So-called “early detection,” like by mammogram, is really, really, really late detection.”

On a more personal note, during World War 2, my dad was stationed at the Brooklyn Navy Yard. His duty was to paint the lower decks of ships, including the Queen Mary. At that time asbestos was widely used for heat resistance and electrical insulation on ships. Unfortunately, no connection was made between asbestos exposure and cancer. That was in 1943. In 1986 he experienced chest pains and was diagnosed with Mesothelioma, a lung cancer caused by asbestos. That cancer was 43 years in
the making!

According to the Department and Research Unit of General Practice, Institute of Public Health, University of Copenhagen, Copenhagen, Denmark:

“The balance between benefits and harms is delicate for cancer screening programs. By attending screening with mammography some women will avoid dying from breast cancer or receive less aggressive treatment. But many more women will be over-diagnosed, receive needless treatment, have a false-positive result, or live more years as a patient with breast cancer. Systematic reviews of the randomized trials have shown that for every 2000 women invited for mammography screening throughout 10 years, only 1 will have her life prolonged. In addition, 10 healthy women will be over-diagnosed with breast cancer and will be treated unnecessarily. Furthermore, more than 200 women will experience substantial psychosocial distress for months because of false-positive findings. Regular breast self-examination does not reduce breast cancer mortality, but doubles the number of biopsies, and it therefore cannot be recommended. It is not clear whether screening with mammography does more good than harm. Women invited to screening should be informed according to the best available evidence.”

In other words, with all the hullabaloo surrounding National Breast Cancer Awareness Month (NBCAM) and the importance of getting tested, women are not being informed enough about the harm that can result from screening. Unfortunately, because of the people´s trust and faith in Doctors and the medical profession, individual decisions are often made blindly, because all of the facts are not available. Decisions are faith-based instead of evidence-based. 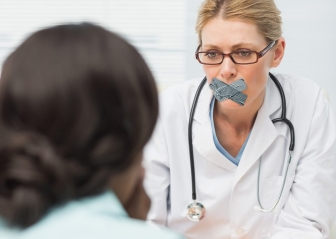 National Breast Cancer Awareness Month was established in 1985 as a partnership between the American Cancer Society and the pharmaceutical division of Imperial Chemical Industries (now part of AstraZeneca, a leading manufacturer of oncology drugs). It´s the 5th largest pharmaceutical company in the world…with branches in more than 100 countries. This might lead us to the conclusion that breast cancer is big business and mammography is one of it´s primary profit centers. Since the industries goal is to maintain and increase profits it would be beneficial for them to downplay the risks and keep women uninformed.

Below are a few key points for women to consider when choosing whether or not to undergo a mammogram screening:

1. For every 2,000 women receiving mammograms, only ONE would have her life extended at all. TEN women, though, might be harmed with chemotherapy, radiation or mastectomies.

2. Mammograms expose your body to ionized radiation that may cause cancer by triggering mutations and other genetic damage as well as cause normal cells to become malignant.

3. A newer type of mammogram touted to be much better at detecting breast cancers called tomosynthesis takes a 3D image of the breast. You definitely want to avoid this type of mammogram because it uses three times more radiation than the standard type.

4. Mammography also compresses your breasts tightly, and often painfully, damaging the breast tissue which could lead to a lethal spread of cancerous cells, should they exist.

5. Dr. Charles B. Simone, a former clinical associate in immunology and pharmacology at the National Cancer Institute, said, “Mammograms increase the risk for developing breast cancer and raise the risk of spreading or metastasizing an existing growth.”

6. Aside from the radiation risks, mammograms carry a first time false positive rate of up to 6 percent. False positives can lead to expensive repeat screenings and often results in unnecessary chemotherapy and radiation treatments and surgeries.

7. 80% of the 1.6 million breast biopsies done each year in the United States, because of a suspicious mammography, are negative.

8. The problem with mammograms is that they often detect “cancer” that would never spread or do any harm if left untreated. It’s called “stage zero” cancer. It can be regressed by simple lifestyle changes and without any medical treatment.

9. The New England Journal of Medicine has pointed to approximately 1.3 million cases of misdiagnosed breast cancer, which shows that mammograms are leading millions of women astray, making them think they have cancer when they really don’t.

10. Just thinking you may have breast cancer, when you really do not, focuses your mind on fear and disease, and is actually enough to trigger an illness in your body. So a false positive on a mammogram, or an unnecessary biopsy, can really be damaging.

• Self – Examination and mammograms can only detect cancers that have had many years even decades to develop. A cancer just doesn´t pop up.

• Since mammograms can do more harm than good, it´s important to demand all of the facts from your health care practitioner before making a decision.

• Since the Medical Profession is not telling us the whole truth, in order to make a conscious choice, women need to be more proactive and investigate on their own whether or not to get a mammogram.

• Since cancer “prevention” and not “detection” is the best solution… to avoid this disease, as well as other chronic diseases, it is incumbent upon each one of us to make healthy lifestyle changes…before it´s too late.