I believe that most of us understand that what we eat effects our health, either positively or negatively, but I think that too few of us are aware of the effects that what we eat has on the Earth´s environment…including it´s animals, water, pollution and land damage. One of the problems is that, although 98% of the meat we eat comes from factory farms, we are very far removed from what is happening, behind the scenes, when we buy the packaged meat at the supermarket or from the local butcher shop. Whereas 50 years ago, a rancher would have 10 head of cattle, now factory farms handle thousands at a time. The result is that the average person is so far removed from the realities of factory farms that they are unaware of the enormous damage they have on the Earth´s environment…in the following areas:

According to the report, “Livestock’s Long Shadow –Environmental Issues and Options”, released in November of 2006 from the United Nations Food and Agriculture Organization, livestock emerges as one of the top two or three most significant contributors to every one of the most serious environmental problems. With rising temperatures, rising sea levels, melting icecaps and glaciers, shifting ocean currents and weather patterns, climate change is the most serious challenge facing the human race. The livestock sector is a major player, responsible for 18 percent of greenhouse gas emissions. This is a higher share than transport which emits 13.5 percent. In addition to CO2, environmentally toxic gases produced by livestock include nitrous oxide, methane, and ammonia generated from the animals’ intestines—belching, farting, and manure. The report says “The impact is so severe that it needs to be addressed with urgency.” (Note: The release of this report was not covered by any of the major news outlets, only a few mentions are found on the Internet). 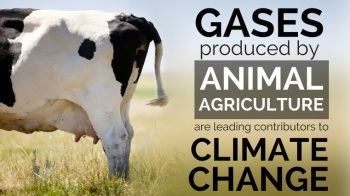 According to Dr. James Hansen, Director of NASA’s Goddard Institute for Space Studies and who has been called “a grandfather of the global warming theory”:
“The focus solely on CO2 is fueled in part by misconceptions. It’s true that human activity produces vastly more CO2 than all other greenhouse gases put together. However, this does not mean it is responsible for most of the earth’s warming. Many other greenhouse gases trap heat far more powerfully than CO2, some of them tens of thousands of times more powerfully. When taking into account various gases’ global warming potential—defined as the amount of actual warming a gas will produce over the next one hundred years—it turns out that gases other than CO2 (methane, nitrous oxide and ammonia) make up most of the global warming problem.” Again, livestock is the main producer of these gases.

• Globally, 70% of the total arable land is occupied by grazing livestock. Of the other 30%, 28% is for bio-fuel and only 2% for human consumption.
• Every 2 seconds, an area the size of a soccer field is destroyed in order to feed livestock, so that the world´s need for meat can be satisfied. In other words, we´re feeding animals instead of feeding people. Unfortunately, 1 billion people suffer from hunger and more than 30,000,000 die from hunger each year.
• According to the United Nations World Food Program it is estimated that a person dies of hunger or hunger-related causes every ten seconds. Sadly, it is children who die most often.
• Clearing forests to create new pastures is a major source of deforestation, especially in Latin America. 70% of the Amazon rainforests have been cut down for grazing land. These tropical forests are the “lungs of the Earth” and vital for removing greenhouse gases from the atmosphere.

We´ve all heard about the scarcity of water around the world and some of us do our best to limit water use (i.e., shorter showers, watering the lawn less frequently, washing dishes with less water). We don´t realize that there are roughly 100 million cows in North America alone that require enormous amounts of food. Without a steady supply of soy and corn, which by the way is not a cow´s natural food, slaughter houses would grind to a halt and our demand for meat and dairy would not be met. As a result, millions of acres are devoted to feed crops instead of human consumption. These crops need more water than any other human activity. Most of the water comes from irrigation which results in a huge drain on the water supply. This is happening around the world.

“Imagine how much water we could save and how many starving people could be fed if the arable land was used for feeding humans instead of animals.”

• Livestock pollutes the waters with their waste, antibiotics, hormones, chemicals from tanneries, fertilizers and the pesticides used to spray the crops they consume. These toxic elements seep into the earth and end up in rivers and streams. As an example, in the Gulf of Mexico, below Texas and Louisiana, there is an 8,000 square mile dead zone, caused by fertilizers entering the Mississippi River…from the planting of soy and corn all along the River…to feed animals.

• Each kilo of meat that is produced results in 6 kilos of livestock excrement. And where does this end up…in huge lagoons, where the anaerobic activity releases methane into the atmosphere and ammonia into the water which causes acid rain and acidification of ecosystems. In other words, while human waste is treated…animal waste is not. It´s just piled higher and higher and deeper and deeper.

According to the United Nations Report, livestock’s very presence in vast tracts of land and its demand for feed crops also contribute to loss of other plants and animals; livestock is identified as a culprit in 15 out of 24 important global ecosystems that are in decline. The loss of species is estimated to be running 50 to 500 times higher than previous recorded rates. When rainforests are cut down, animals can no longer compete and are forced to flee. Those unable to adapt will not survive.

The primary driver of climate change isn’t plastics, or cars, or airplanes. It’s actually our industrialized food system? Sometimes I think that we´re being distracted when focus is put on eliminating plastic straws and bags in stores and supermarkets instead of focusing on eliminating the main cause. I´m not against any effort because every little bit counts but I believe we need to have more fact based information and clarity on the subject of Climate Change. Only then can we put our energy and resources where it really counts. While governments debate about vehicle and smokestack emissions and environmental groups complain that little is being done, the fact is that we can tackle the main problem by changing our eating habits. What we eat has by far the largest impact on climate change.
I´m not advocating that it´s necessary to eat 100% vegan or even become a vegetarian. If what I have written, in these past 2 posts, makes sense to you then simply by choosing more environmentally friendly foods at meal-time every day (i.e., grains, vegetables, fruits, nuts and seeds) we can help reduce and even reverse the global warming problem. I believe that it´s time for the citizens of the world to make a difference.