I have a friend who has Parkinson´s disease and recently she was upset and depressed  that her teeth were starting to become loose. So she went to the doctor that has been treating her illness for the past few years and was told that it´s part of the evolution of the disease. He insisted that she begin consuming more dairy products such as milk, cheese and yogurt, because of her body´s need for calcium. Since she has been making more effort to eat a whole foods plant based diet, I became concerned over the doctor´s insistence since I am completely convinced, from the latest research as well as my own experience, that dairy is quite unhealthy and, contrary to the myth we have been taught since grade school, definitely doesn’t “build strong bones and teeth”. The truth is, that countries with the highest incidence of osteoporosis (United States, Great Britain, Finland, Australia, etc.) are also the biggest dairy consumers.

According to Dr. John McDougall:

” The incidence of PD is relatively high throughout Europe and North America. In contrast, rural Africans, Chinese, and Japanese, whose diets tend to be vegan or quasi-vegan, have substantially lower rates. The observation that incidence of PD is similar in African-Americans and in whites, all of whom eat the Western diet, further indicates that environmental factors, not race or genetics, are responsible for PD.

Specific foods have been targeted. For example, the consumption of milk in midlife was found to be associated with subsequent development of PD. Men who consume more than two glasses of milk have twice the incidence of PD as men who do not drink cow’s milk. The American Cancer Society’s Cancer Prevention Study II Nutrition Cohort study has found almost twice the incidence of PD in the highest consumers of milk.”

Dr. Michael Greger on how not to die from Parkinson´s Disease in his book “How not to die”: explains that pollutants such as PCBs, which damage the brain, are still found in higher concentrations in the brains of Parkinson´s patients, even though many of these chemicals were banned decades ago. “You can continue to be exposed to them through the consumption of animal products in your diet, including dairy. Indeed, people who eat dairy free, plant based diets were found to have significantly lower blood levels of the PCBs implicated in the development of Parkinson´s disease.”

As a consequence of my friend´s doctor prescribing dairy, I decided to do a little bit of research on the internet regarding PD and dental problems and found that, most often, the probable cause of this “side effect” could actually be the medicines themselves and not necessarily the lack of calcium. If the doctor was aware of the potential downside of dairy for Parkinson´s patients maybe he could have considered other options such as 1) taking a bone density test for signs of osteoporosis, 2) having the patient see her dentist or 3) even prescribing a calcium supplement. But he didn´t. Instead he prescribed dairy.

So, this brings us back to my question in Part 1 of my last post

A) Is it because the people we rely on and trust don´t know this information?

The answer seems to be yes! And who do we trust the most? DOCTORS.

And why don´t they know? Well, to a great extent it´s because of their lack of information regarding the power of nutrition in preventing and reversing diseases. In other words, during those long years preparing to be a doctor,  the study of nutrition was almost nonexistent in the great majority of medical schools. . As a result, most medical doctors do not know what their patients should eat to prevent, treat, and often cure chronic diseases, including Parkinson´s. So, unless they took it upon themselves to investigate the power of nutrition on their own (post-graduation), how would they know? In other words the doctor is ignorant and the catch phrase “Ignorance is bliss” doesn´t really work here…especially for my friend. 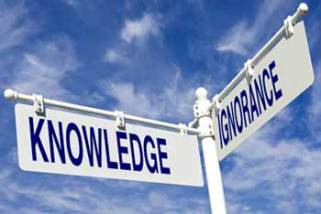 And now onto question B) Is it because they (doctors) really do know and don´t want us to know this information?

It’s easy to lose sight of the obvious, that the practice of medicine is a business and physicians work for profit. One of the conflicts that many doctor ‘s face is, while the information becomes more and more conclusive that a healthy diet including lots of fruits, vegetables and grains would be beneficial to the patient, there´s the reluctance of suggesting a too “extreme” diet for fear of “turning the patient off” and losing them and $ to another doctor who would let them continue with their bad habits. After 7 years of rigorous schooling it´s just bad business. After all, in the end there´s always the pills to “cure” what´s ailing you…so why bother with offering diet as an option.